The year 2002. I was helping with arranging author visits to Gomes Elementary School in Fremont, California.  Previously the PTA (Parent Teacher Association) had arranged successful visits from a series of authors.    As I was in charge of the program, I had suggested that we try and invite an illustrator for a change to address the students.

While doing my due diligence I came across a flyer that announced a talk by author and illustrator Daniel San Souci in the local library. At the talk I was impressed with how Dan was able to connect with and hold the attention of the children and the adults present.  What caught my attention during that presentation was Dan telling his audience of the amount of research he does on the subject before he starts to think of the illustrations.  He also mentioned that he often used the help of his wife who is a librarian. 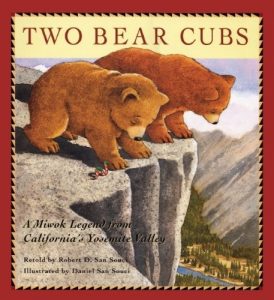 This was also where I was introduced to the Two Bear Cubs book, on which he had worked with his brother Robert (Bob) San Souci.  Dan had done the illustrations while Bob was the author retelling this wonderful Miwok legend, set in the Yosemite valley.

When tracing an outline of a drawing, Dan said that it will be easier if you do it on a table with a glass top.  You should be able to see both sides of the glass top.  Place the drawing that you want to trace on the top part of the table and have a light shinning through the bottom part.  The light illuminates the drawing and makes it easier for tracing.  Try it!

Dan had worked as an instructor at the Academy of Art in San Francisco from 1986-1995.  During this time he had a Korean student, Eujin Kim Neilan.  Eujin wanted to publish her favorite Korean tale in English 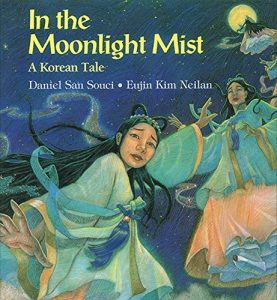 and asked Dan if he would consider illustrating the book.  Dan agreed but after the first draft he realized that it probably might be better if she  illustrated the book.  He suggested to Eujin that he write the story as told to him by her and she illustrates it.  Thus “In the Moonlight Mist” was born.  A beautiful tender love story that I would encourage all to read.  This story showed me what a great teacher and mentor Dan was and how he encouraged his student. They went on to collaborate on another Korean tale “the Rabbit and the Dragon King”.    Eujin Kim Neilan is a successful artist and illustrator.

After more than ten years I am now connected to Dan on Facebook and enjoy the paintings that he posts.  You can see his artworks and read his blog on his website – http://www.danielsansouci.com/

It was also ten years later that I had the good fortune of meeting his brother Robert (Bob) San Souci and that is my next blog post.

I am also now the proud owner of two books that have been written by Bob and illustrated by Dan and signed by both of them 10 years apart.